The Geography - an iOS/Android experience

Thanks to the AAG for the tipoff to this interesting-sounding game.

A new indie video game, The Geography, "bridges the interactive with the meditative" https://t.co/iUBxqctwu4 h/t @brockwilbur for @TheFastPitch

The Geography is a new indie video game from a creative duo that bridges the interactive with the meditative. A collaboration between Michael Berto and Titouan Millet, the program uses geographic data from Svalbard, Norway rendered into low-poly landscapes—brought to life with soft shaders. An endless and nonlinear musical score weaves soundscapes, to keep the ambiance evolving.
It costs £6.99 for iPhone.
Posted by Alan Parkinson at 08:54 No comments:

Another music post, and an album with a landscape theme to it...
Posted by Alan Parkinson at 06:47 No comments:

Posted by Alan Parkinson at 06:17 No comments:

Check out this amazing New York Times visualisation of the impact of climate change on every country in the world.

Postcards from a World on Fire. 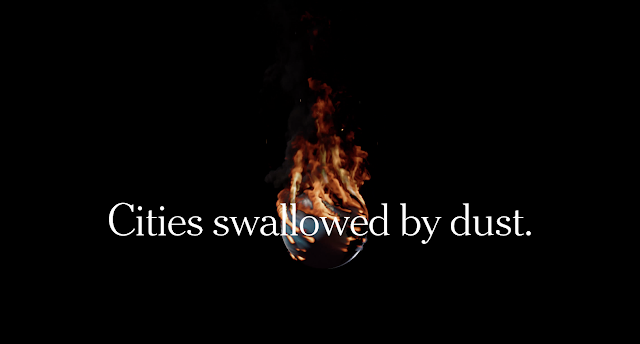 Another reminder of the value of subscribing to the New York Times.

Posted by Alan Parkinson at 13:48 No comments:

I often post details of cliff collapses along the stretch of coastline which featured in the OCR textbooks that I wrote. This is close to Sidmouth and collapses regularly, including heading the other way to Budleigh Salterton.

Last weekend saw a cliff collapse near Mundesley which is on the Norfolk coast, and was blamed on waterlogged cliff material. Some houses are now very close to the edge of the cliff and are nervous about the potential for further cliff falls.

Posted by Alan Parkinson at 13:38 No comments:

Not an obvious connection at first glance. This report suggests that there is an alleged connection.

How does your food affect the environment?

Worth further investigation perhaps as an alternative to palm oil.

Speaking of which, check out this thread by Hannah Ritchie on palm oil...

Companies often boycott palm oil to look sustainable to consumers. But a ban is rarely the recommendation from experts.

🧵on why it's a complex topic pic.twitter.com/Hgyc09KStB

Posted by Alan Parkinson at 12:32 No comments: 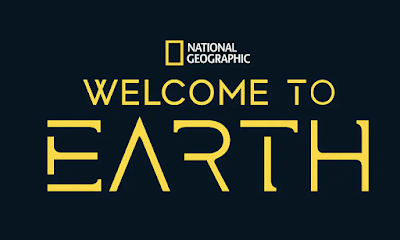 There are plenty of geography-related programmes to be found on the various streaming services. Check out the new Will Smith programme made by National Geographic.

Here's the description of the programme:

It might seem humans have mapped every inch of our planet’s surface, but look closer and you’ll discover that there is still so much more to uncover — the age of exploration is far from over! WELCOME TO EARTH, a Disney+ original series from National Geographic, follows two-time Academy Award® nominee Will Smith on an extraordinary, once-in-a-lifetime adventure around the world to explore Earth’s greatest wonders and reveal its most hidden secrets.
Throughout the six-part limited series produced by visionary Academy Award-nominated filmmaker Darren Aronofsky, Protozoa Pictures, Jane Root’s Nutopia and Westbrook Studios, Will is guided by elite explorers on an awe-inspiring journey, getting up close and personal with some of the most thrilling spectacles on the planet — from volcanoes that roar in silence to deserts that move beyond our perception to animal swarms with minds of their own. Combining breathtaking cinematography with Will's boundless curiosity and enthusiasm, the blockbuster series is an exciting, multisensory ride through Earth’s most mind-bending portals. 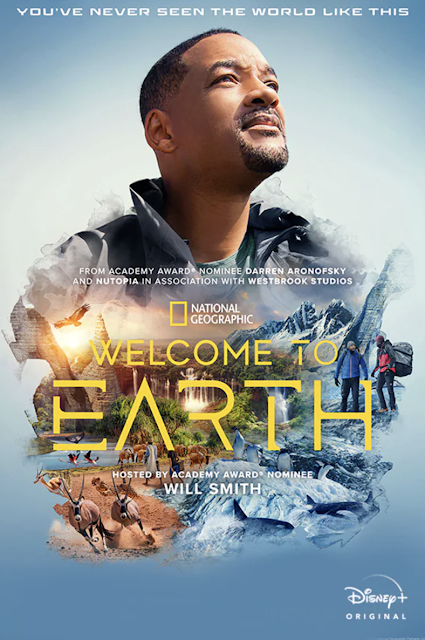 Posted by Alan Parkinson at 12:25 No comments:

Regular readers of the blog will know how much I enjoyed Cal Flyn's book 'Islands of Abandonment' and it is coming out in paperback just ahead of Christmas.

Cal is interviewed in the latest episode of the 'Sense of Place' podcast which references the places in the book. 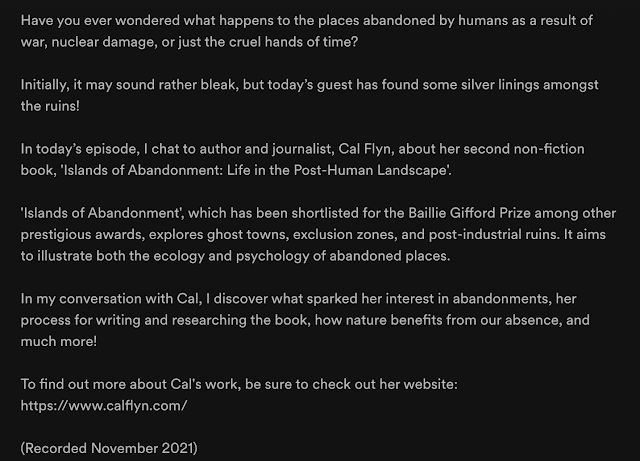 Also worth checking out Cal's latest journalism too for the Observer.

It can be listened to in a number of ways. This is the link to the Spotify stream.

Posted by Alan Parkinson at 00:18 No comments:

A Scottish Landscape - rendered in music 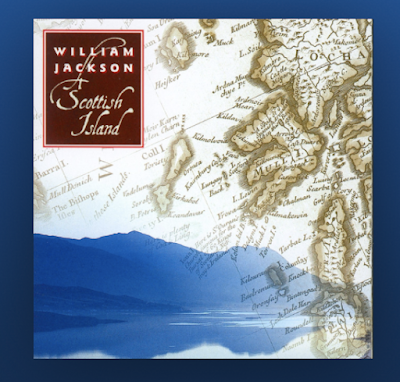 Just listening to this earlier while doing all the work to follow up from 2 days of ERASMUS meetings (of which more to come in a blog post in the next day or so.)
This is a wonderful piece of music, composed by William Jackson, one of the members of Ossian: one of my favourite ever bands.
The music conveys the atmosphere of different elements of the Scottish landscape, and ends with a suite of pieces named after islands including Iona, Islay and Jura.
It can be found on many of the usual music streaming services.

Posted by Alan Parkinson at 12:28 No comments: