Earlier in the year, I joined the team of people who has been creating Slow Ways routes: walking routes to connect up the UK's towns and cities and other large population centres. These follow public footpaths and bridle ways and avoid busy roads.

The idea is another initiative from Daniel Raven Ellison.
The project now needs a logo.

The Slow Ways will be a network of 7,000 walking routes that connect Great Britain’s towns and cities as well as thousands of villages. People will be able to use the Slow Ways to walk between neighbouring settlements or daisy-chain them for longer journeys.
The first draft of the Slow Ways routes have been imagined and created in lockdown by hundreds of volunteers from across the country.
We now need a strong visual identity for the Slow Ways. In the future this might be used on signage, waymarkers and maps. For now, it will be used on the website we are creating as well as t-shirts, posters and in other places.
That’s why we’re organising this competition. We’re looking for a strong symbol for the Slow Ways that will give them a clear identity. You can see some examples of symbols used on trails around the world on this Twitter thread.

We are looking for a symbol that:

A snail was suggested by a Slow Ways volunteer and this has turned into a much-loved idea. Snails are slow and humble explorers that carry their homes on their backs, leave trails, are found nearly everywhere and, unknowingly, will actually share the Slow Ways with us. They also have a very distinctive and identifiable shape.

As well as having their symbol used for the Slow Ways, there will be a prize of £250 for the artist(s) of the winning design.

A judging panel will shortlist designs and pick the final winner. The panel will be made up of volunteers who have helped to draft the Slow Ways network and relevant experts.

Why not have a go and submit your entry using the link on this page.
Posted by Alan Parkinson at 08:48 No comments:

During this term of lock down, Richard Allaway and Matt Podbury have been doing a double act to support the global IB DP community.
Think 'Reeves and Mortimer' rather than "Laurel and Hardy'....

Richard's site: Geography all the Way has a fantastic range of materials for teaching a whole range of age groups. Most areas of the site, which has built up over many years, remains free, and the IB area is one of the few areas that is subscription based, but well worth the small amount to gain access - think how much money you're saving by not using glue sticks, photocopier etc.

Similarly Matt Podbury has a wonderful site: GeographyPods which is largely free, but has a relatively new IB area which is behind a paywall to help support the development of further new materials for the wider teaching community.

Both sites are well worth paying the small subscription fee from departmental budgets.

You can watch a repeat of each webinar on this link here.
You will also see that there are links to the earlier webinars and associated references.

For ease, here's the first run through of the slide deck, which I think was the best one.
I didn't realise I'd be seen alongside the slides on the recording so excuse any gurning...

The Slides themselves can be viewed here.

Full disclosure: as I contributed resources / ideas to both sites, Rich and Matt have kindly given me a free subscription to access their sites, which has allowed me to see their contents and comment on their usefulness for IB colleagues.
Posted by Alan Parkinson at 03:52 No comments:

Never seen this before until it appeared on a Facebook group earlier.
Jan Garbarek and Mari Boine with a piece of music from Jan's 'Visible World'
Powerful Sami singing and the Norwegian landscape along with Jan's Sax...

Apparently made for the Winter Olympics. 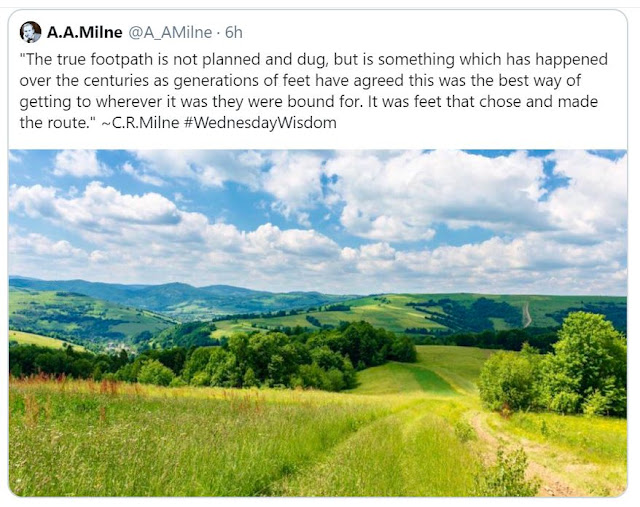 Posted by Alan Parkinson at 04:16 No comments:


The beach hisses like fat, On his left, a sheet
of interrupting water comes and goes
and glazes over his dark and brittle feet.
He runs, he runs straight through it, watching his toes.
-- Watching, rather, the spaces of sand between them,
where (no detail too small) the Atlantic drains
rapidly backwards and downwards. As he runs,
he stares at the dragging grains.
Posted by Alan Parkinson at 12:08 No comments:

Michael Palin was on the Andrew Marr Show this morning.

He was asked about what travelling might be like in the future as we come out of lockdown and lose our holidays. How should we cope with that.

"I think you can travel less and travel better.
If we have to be confined to travelling in the UK, it's not a bad place to travel - there are all sorts of wonderful places - and different landscapes and different sorts of atmospheres - Northern Scotland, Cornwall.
Go to places and learn more about them, enjoy them more.
Find out more about your own country.
It's going to be very difficult for people right across the world to actually travel again as we did before until we find a vaccine. Nobody is going to pack people into aeroplanes as they did before.
No cheap and cheerful flights around the world.
It's going to be very difficult to see the rest of the world. So narrow your horizons is not necessarily a bad thing.
Look more carefully
Look more thoroughly
Learn to enjoy your own country.
Travelling is not necessarily as exotic - it can be local but can still be as interesting and inspirational."
Posted by Alan Parkinson at 12:07 No comments: