Glacier on the Move

Lessons 9 and 10 from 'Look at it this Way' focus on upland glaciated landscapes in New Zealand.

This video is a 2 year timelapse from the British Geological Survey's Facebook page of a glacier in Iceland.

The latest timelapse from the BGS Iceland Glacier Observatory shows just how dynamic glaciers really are. This film takes daily noon-time images from one of our automated weather stations, between April 2011 and yesterday, May the 29th 2013. This is the ice flowing through the icefall on Falljökull, the eastern arm of the glacier. Immediately below the icefall we know the ice flows at roughly 50 meters per year, or around 15cm a day, but the icefall itself is faster flowing. We will be conducting research this September to find out just how fast…

Posted by Alan Parkinson at 04:07 No comments:

The new Australian Curriculum document for Geography was launched in the last few weeks, and there's plenty of LANDSCAPE influences in there.
The support site for the introduction of the new curriculum has now gone live too.
It's called GEOG SPACE.

There's quite an influence from some familiar UK names here, such as this diagram on the 'Child as Geographer' from the work of Simon Catling. 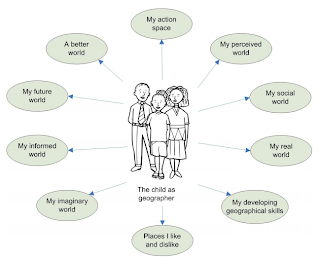 © 2013 Education Services Australia Ltd, except where indicated otherwise. You may copy, distribute
and adapt this material free of charge for non-commercial educational purposes, provided you retain
all copyright notices and acknowledgements.

There are also influences in the SUPPORT UNITS from a range of UK geographers including Fran Martin, Paula Owens, Stephen Scoffham and Liz Taylor.

The SUPPORT UNIT section, in fact, has plenty of LANDSCAPE exemplars.

Delve into the CORE UNITS, and you will find a range of materials for teachers to use straight away and get the curriculum underway...
Here's an activity sheet for a unit on MUSIC FESTIVALS for example (PDF download) which provides a good starter, although I think the Woolvens did a better job here :)

I also liked the unit on E-Waste, and ideas for units about place and coastal management.

For example, here's the New South Wales About Fieldwork website, which was a new one for me. 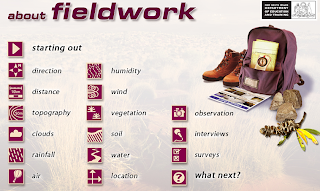 Posted by Alan Parkinson at 03:57 No comments:

There are plenty of intriguing landscape resources out there. I try to point out ones which are relevant to  the geography classroom (of course)
This LANDSCAPE URBANISM article has some interesting ideas and content, tied up in some more academic language, but worth reading.

Posted by Alan Parkinson at 12:02 No comments: 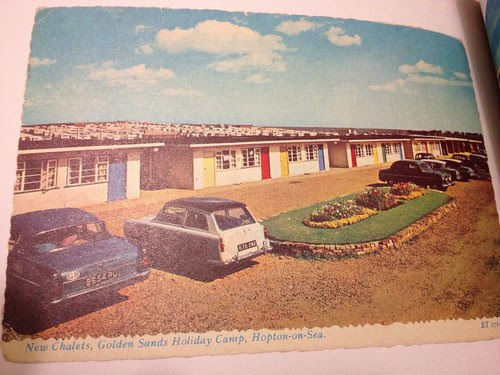 Image from the book 'Boring Postcards', as featured in the GeoLibrary.

Hopton is a resort near Lowestoft.

Over the winter, the fearsome and relentless Easterly winds which we had on the east coast have scoured and stripped away the sand from some beaches in the area.
However, some people suggest that there is another reason for the disappearing sands.

This could become a new alternative to the classic Mappleton case study, and the tale of Sue Earle...

I'm heading over there in the next few weeks to see what the impact of the weather has been
It's a reminder that the coast is an area that undergoes constant change: from the small changes with every tide, to the longer term changes, and the impact of humans.

Save Hopton Beach - has a Twitter feed, where they tweet a range of information relating to the fight to save the beach.

Download the document (PDF) from the Save Hopton Beach website.
Posted by Alan Parkinson at 13:49 No comments:

GeoGuessr - a way to explore landscapes... 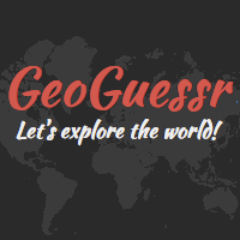 A mention for a little variation on a site which I like a little more to be honest, called Mapcrunch.

It's become very popular in lots of places over the last week.

GeoGuessr is a 'game' which takes you to 5 'random' places and challenges you to identify where you are.
A map is provided so that you can add a pin at an appropriate place. This action in itself requires a little geographical knowledge...
There is a score provided for how close you are to the actual location.

There's a chance element involved of course, and there are perhaps more clues available in urban areas than there are in rural areas. These involve signs on buses and other vehicles.
For example, one image I was presented with was the Eden project, so I got within 2 kilometres of the actual location - another looked like Australia but was in fact in S. America so I was several thousand kilometres out...
Since the image is a StreetView image, you can also head off in a direction of your choice to look for clues, or you might decide that is cheating and not allow it...

Remember that Streetview doesn't cover the whole globe either, so if a picture looks like it might be in Africa, then it's probably South Africa or Botswana.
This map shows the current coverage.

This Slate article was closer to my thinking about the use of the site - as students use the site, they should be developing ideas for a guide for how to do well on GeoGuessr. These could be put together using an appropriate package (or a paper and pen)

There could be league tables for how well people do perhaps, or set group challenges. Perhaps a 'GeoGuessr' of the week ?
You could also provide options for support that could be used each game (in the vein of 'Who wants to be a Millionaire')
These could include:


Any other ideas for 'jokers' ?

There could also be a rubric for assessing the clues that are provided in an image...

e.g. Urban or Rural, Weather conditions, presence of snow, upland landscape or lowland, coastal or inland, presence of a distinguishing feature such as a large building, flags, language / typography / alphabet used in signage, advertising billboards, company names on vehicles or stores
More often than not it's a 'feel' that you get - is it European or not ? is the vegetation tropical in appearance ?

Any other thoughts for using with pupils ?
Posted by Alan Parkinson at 03:11 No comments:

If you have some free time this summer, you could follow in the footsteps of Robert MacFarlane, who has featured in this blog many times...
Visit the Wayfarer website for more details and to enter the competition....


We’re looking for someone who doesn’t mind getting their boots dirty, can string a sentence or two together and can get creative about how they share their journey with the world. You should already know your way around social networks and be able to produce short videos on your own. The winner will become our Wayfarer and will get paid to travel around the UK throughout July and August (so please only enter if you’ll be available all summer). You’ll visit some of the Old Ways paths, but, even better, you’ll strike out on your own and make some new discoveries, on or off the beaten path. You will then report back on your adventures through blog posts, photos, videos and tweets.
Posted by Alan Parkinson at 13:01 No comments: