I spent a pleasant few hours earlier today in the valley of the Gaywood River, just east of King's Lynn with colleagues from UEA and the Norfolk Wildlife Trust. We were involved in testing out an augmented reality solution for allowing visitors to a place to find out more about the nature's benefits / ecosystem services in that area.


Sarah Taigel has created, and is trialling an application called VesAR which stands for Visualising Ecosystem Services using Augmented Reality. It uses an app called LAYAR, which I have previously experimented with.


Holding the phone or tablet up at particular locations reveals 'hotspots' floating in the camera view, which contain more information about what the visitor is looking at. (See the image below)

You can perhaps think of other examples of the three types of benefit.
Landscapes are increasingly being managed to protect the existing benefits, and to provide more benefits where possible. 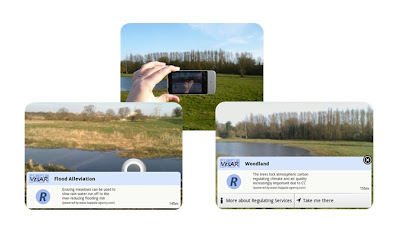 You can read more about the work in this BLOG POST here or on Sarah's website: Communicating Landscape Futures.

Sarah will be presenting at the Enhancing Fieldwork Learning Showcase at Preston Montford in September. I'll be there too presenting the work of Mission:Explore and Guerrilla Geography. The tours that Sarah has been creating will be released to the general public, and be accessible to anyone with an appropriate GPS-enabled smartphone or 3G tablet. I shall let you know when that happens in a future blog post.

There's an exhibition on at the British Library which I plan to visit over the next month or so.
Wastelands to Wonderlands explores the different ways that Britain has been represented in fiction over the years, and contains many manuscripts and other materials.
There's plenty here that's relevant to teaching about landscapes, and the way they are represented.

I'm grateful to Angus Willson for the loan of the exhibition catalogue in advance of my visit. Posted by Alan Parkinson at 00:48 No comments:

Preparing some materials for a course in a few week's time. It's being held at the HQ of travel company Discover the World.
The course is being run along with Simon Ross, who produced a number of books that I made heavy use of when teaching, particularly his mapskills book.
The theme is Developing a Global Sense of Place at KS3 and GCSE. I'm exploring KS3. 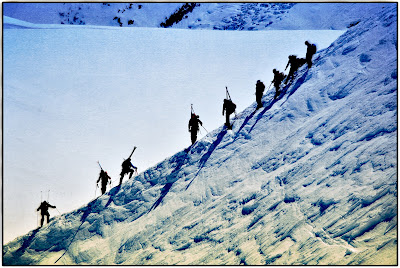 There are quite a few areas that I could focus on as PLACE is a key concept in geography, and the idea of visiting places is central to the work of Discover the World.

As always, once the germ of an idea comes to me, it's time to flesh it out with various resources and web tools. I have put together two sessions which will eventually be shared on Slideshare.
Interestingly, the OFSTED Subject Report on Geography, published in 2011, made a series of recommendations.
The first was that schools should:
It's interesting that a sense of place is described as core knowledge ?

I'll be using a lot of my own images of distant places, and others by colleagues. Images of places can be obtained from COMPFIGHT
This enables searching for images which are copyright cleared through Creative Commons.

I shall be referring to the following books / resources, as well as some of the outcomes from the GA's National Curriculum Reform Working Group that I have been serving on. Some of the things that we've heard from Michael Gove this week have meant a fresh perspective on some of this work.

There'll also be lots of ideas to take away as always.

The houses that fall into the sea... 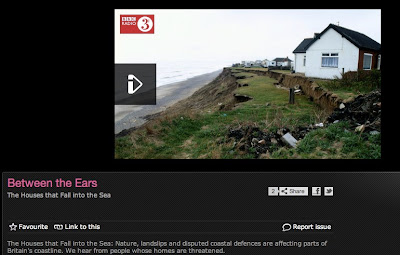 Lyz Turner's house, in the East Yorkshire town of Withernsea, is falling into the sea. "My house has started talking to me," she says. "It produces haunting sounds like far-off women wailing."
This programme, combining interviews with music and the sounds of the sea, the wind, the land, the dying houses, explores how people cope with natural calamity: with anger, stoicism, distress, and art.
One winter, Ron and Judith Backhouse watched as first their fence, then their shed, and finally three trees slipped over the cliff at the bottom of their garden on a private estate above Scarborough. "The crack is running up towards our next door neighbour's house," says Ron. "It's maybe five or ten metres away from his bungalow now and we're connected to him. So if he goes, we go, too."?
Artist Kane Cunningham bought a condemned bungalow on the same estate so that he could live in it, use it as an artistic installation and document its demise. Since he moved in, the neighbouring three houses have been demolished for safety reasons, and he reckons his is next.
"You can't fight Nature," he says, "so you may as well celebrate its destructive force. Houses aren't immortal, and neither are we, despite what we may want to believe."
"As I listen to the soft wailing through the wall," says Lyz Turner, whose family have lived here for three generations, "I feel the house knows what's coming. Since Domesday there's been a dwelling where I live, and it seems all the voices of the past, whoever lived here, all the people from the lost villages under the sea, are crying for us now.".
Posted by Alan Parkinson at 08:37 No comments:

Always been a fan of Richard Long's work, and the way that it links to landscape.
He also went to St. Martin's like my wife :)

There's an exhibition of his work on in Wakefield, which I shall try to get to the next time I am up in Yorkshire.
This article describes hos career and work.

Posted by Alan Parkinson at 12:07 No comments:

Thanks to Keir Clarke for tipoff to another useful site which merges a range of different media.

Posted by Alan Parkinson at 01:33 No comments:

Coastal landscapes feature in the book in the Chapter 'Living on the Edge'. 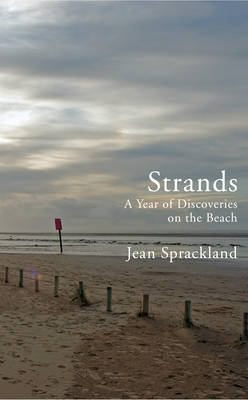 One of the downsides of Twitter is that it has made me want to buy loads more books which I can't afford to keep doing.

The latest tipoff came via Joe Moran.
I've enjoyed both of Joe's books that I've read, particularly 'On Roads', which I think is due a re-read.
He suggested that he had enjoyed Jean Sprackland's book on 'Strands'.

There was also a nice spot of feedback in that reading the preview section that's available on Amazon there's a nice quote by Joe Moran to describe a beach...

It is 'a frontier not only between water and solid ground, but also between the wild and the domestic'.

Posted by Alan Parkinson at 01:26 No comments:

Posted by Alan Parkinson at 06:47 No comments:

Listen to Simon Armitage in particular in this clip, which relates to the British Library exhibition on landscape and literature. It's on my list of things to do in the next few months when I'm in London.

There are other clips too, which I discovered via the excellent SOME LANDSCAPES blog, which is a very useful bookmark for anyone interested in culture and landscape....
Posted by Alan Parkinson at 06:42 No comments: 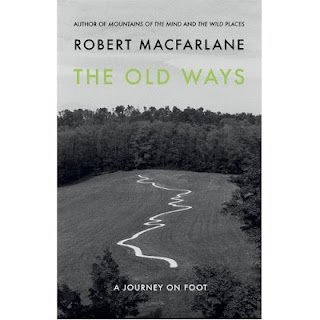 Surprised to find that my copy of the new Robert MacFarlane 'The Old Ways' arrived today, although it's not supposed to be out until the 7th of June.
Not that I'm complaining...
Started reading it straight away... was supposed to be saving it for summer.

Posted by Alan Parkinson at 10:21 No comments: