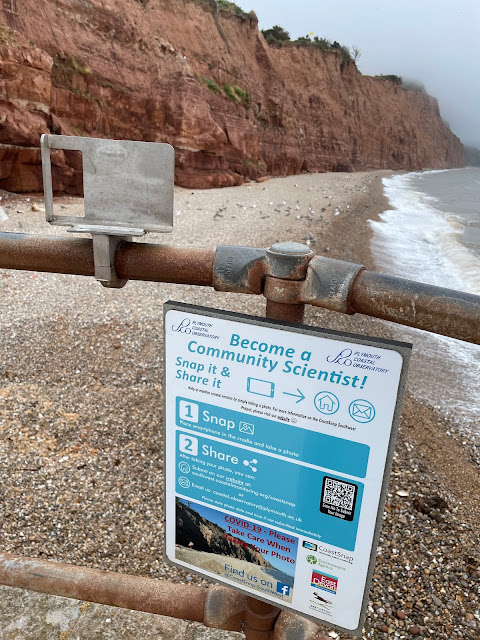 Regular readers of the blog will know that I visit Sidmouth each year to visit the cliffs that I featured as a case study in the OCR A and B GCSE Geography books that I wrote (which are now in a 2nd edition, which is excellent).

There are regular clif falls and the cliff has retreated substantially over the last few years and the East Beach is closed off to people because of the danger.

I was there last week during the Sidmouth Folk Festival (which was back in person once again) and took these images. There is a smartphone mount where you can place your phone and take an image to upload to the website.

I did this to contribute to the citizen science efforts to monitor the retreat of the cliffs. 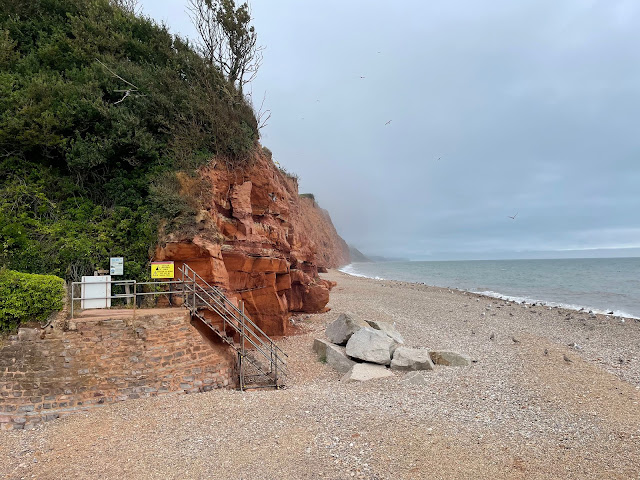 It appears there was yet another cliff fall earlier, which has closed off the beach again.

⚠️ If you're soaking up the sun in #Sidmouth this weekend, please remember that access to East Beach is closed for public safety due to frequent cliff falls.

Please take note of signs and follow advice from the lifeguards. pic.twitter.com/0iIhSnfcaD

A week after my visit there was another large cliff fall.

Thanks to Paul Berry for the link to the Devon Live article. 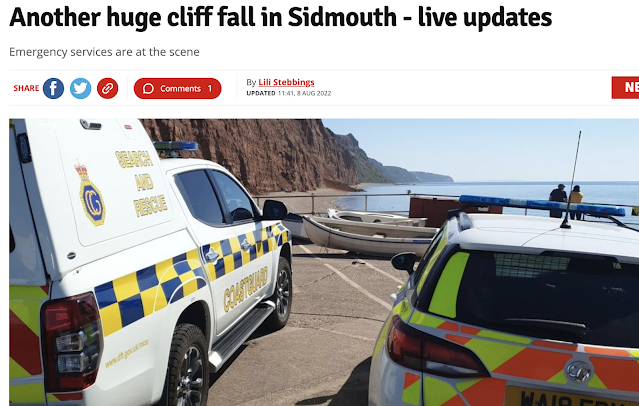 Cliff images at the top of the post: Alan Parkinson, and shared under CC license

Posted by Alan Parkinson at 05:42 No comments:

This is a film I watched earlier in the week.

When I first started teaching, there were very few videos which had been made close to volcanoes. Plate Tectonics as a theory was only about twenty years old. The films we did have were mostly made by a couple of French volcanologists: Maurice and Katia Krafft.

They were the Jacques Cousteau of volcanoes. He explored the sea, they prowled the edges of lava flows, photographing, filming and sampling. They made frequent media appearances and made films and wrote books to fund their research. The style of filming and the red hats are similar to those of Cousteau (and the Wes Anderson homage as well)

They divided volcanoes into the red and the grey.

The grey volcanoes were the dangerous ones... think Mt. St. Helens, Pinatubo, Nevado del Ruiz and Unzen in Japan.

The film is made from media from their archive, with a few animation elements and other elements, with a narration by Miranda July. It's really beautiful and the shots of eruptions are mesmerising. I remember hearing the news of their death and seeing the shots of the pyroclastic flows on Unzen.

I highly recommend that you go and see this film at the cinema.

A film by Sara Dosa.
Katia and Maurice Krafft loved two things — each other and volcanoes. For two decades, the daring French volcanologist couple roamed the planet, chasing eruptions and documenting their discoveries. Ultimately, they left a legacy that forever enriched our knowledge of the natural world.
Director Sara Dosa and the filmmaking team fashion a lyrical celebration of the intrepid scientists’ spirit of adventure, drawing from the Kraffts’ spectacular archive. FIRE OF LOVE tells a story of primordial creation and destruction, following two bold explorers as they venture into the unknown, all for the sake of love.
A cross posting from my Geography in/on Film Blog.
Posted by Alan Parkinson at 02:34 No comments:

A cross-posting from my Geography in/on Film blog.

Matt Black's 'American Geography' is a film to accompany a project where he explores the poorer parts of the USA.
It is a Magnum Photos project.

Between 2015 and 2020, Matt Black traveled over 100,000 miles across 46 states. American Geography documents the experiences of those living in some of the poorest communities in the nation. Starting in his hometown in California’s Central Valley, where billions of dollars are generated every year in agricultural output but one-third of the population lives in poverty, he traveled to other areas of “concentrated poverty” – as US census definition of places with a poverty rate of 20 percent or more. What Black found is that rather than being distant anomalies, these communities were rarely more than a two-hour drive apart enabling him to cross the country without ever crossing above the poverty line.
There is also a website which has further details on the project including diaries, photographs, images of Matt's Greyhound bus tickets and other ephemera. It's really nicely put together and I'm sure could form the basis for an exploration of the southern states of the USA.
The film can be viewed on the link above.
He also visits Flint, Michigan
Visit Matt's website here.
Posted by Alan Parkinson at 02:26 No comments:

One of the best ways to appreciate the landscape is to head out on fieldwork.

The latest GeogPod has been released and it features Paula Richardson and I talking about the GA's National Research Report and how that fed into the development of the National Fieldwork Week.

This starts on Monday the 6th of June. 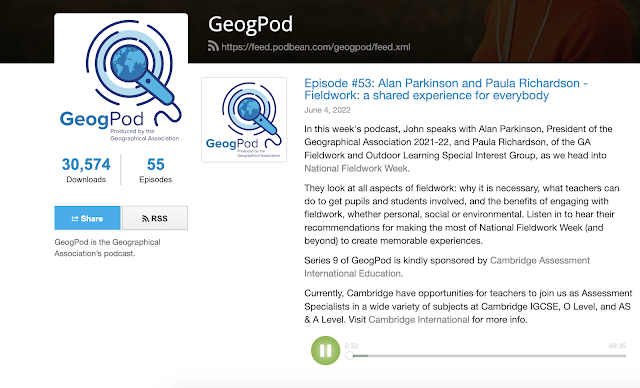 Episode 53 of #GeogPod is now available!

In this episode, @GAGeogger speaks with @GeoBlogs and Paula Richardson on fieldwork

Thanks to John Lyon for hosting - see if you can spot the question I wasn't expecting... :)

Posted by Alan Parkinson at 03:50 No comments:

I was told yesterday that the AQA GCSE pre-release material for the 2022 summer exam season was based in / or mentioned Ely, so I asked for a copy and discovered that it was based on an application by Amey to add an incinerator to their existing waste management park near Waterbeach / Denny Abbey to the south of Ely, along the A10. 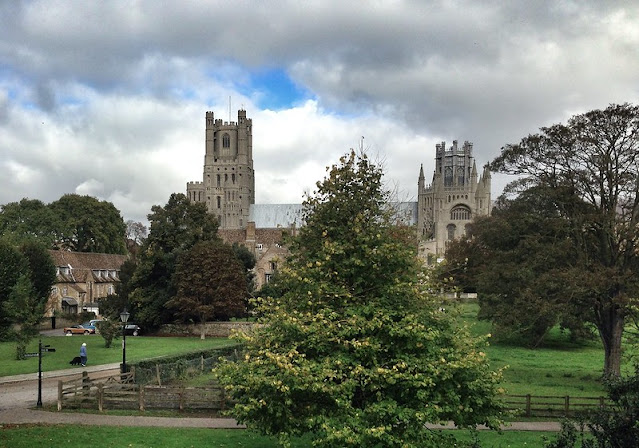 The scheme was controversial, although the benefits were clearly stated by the company. A protest group was set up, and commissioned a report on the impact of the proposal, which included mention of the chimney which would be taller than Ely Cathedral and spoil the view towards it from Madingley (a place of geographical significance).
Interestingly, for a pre-release where students usually have to weigh up whether a planned development should go ahead, the decision has already been made in that the scheme was .... spoiler alert.... turned down in 2020. 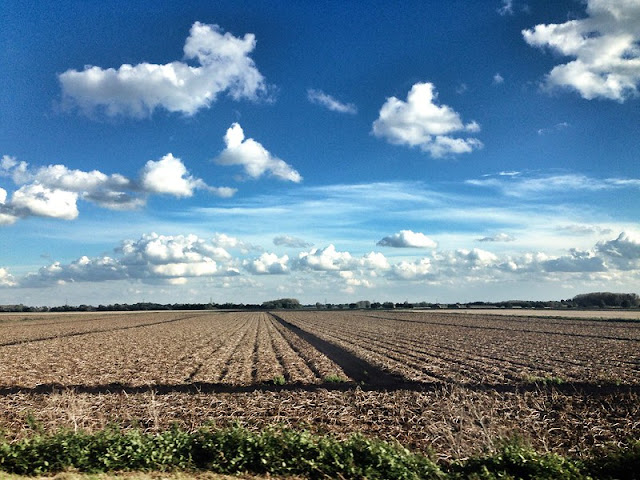 I tried to add some local contexts - newspaper articles, campaign group reports, local landscape character analysis reports etc. into the mix and shared to the community - AQA is the most popular GCSE specification choice so there will be lots of teachers looking to prepare something on this, and we are all working at our limits at the moment with hybrid learning for many still due to students recovering at home from COVID.

Anthony Bennett has added a copy of the document to his page of pre-release materials. This is available to subscribers and non-subscribers of Internet Geography.

An editable version is below or on this link...

Feel free to download a copy and add your own ideas to the document - there have already been some deletions from the document which is a little disappointing, but I have been able to recover to previous versions.

Posted by Alan Parkinson at 02:26 No comments:

Perec and Psychogeography in Huddersfield

This programme was last broadcast in 2021, but is being broadcast on Radio 3 again today.

You will be able to hear it from tomorrow evening, or perhaps Monday morning.

It is presented by Kevin Boniface, a postman based in Huddersfield who has written books on his psychogeographical adventures for uniformbooks.

It connects perfectly with my conference theme of Everyday Geographies, and also the work of Georges Perec and his books which look at the infra-ordinary. 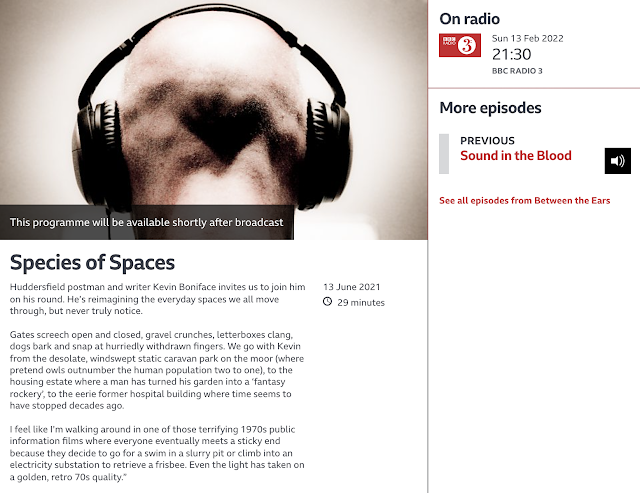 Posted by Alan Parkinson at 03:18 No comments:

Rura - In Praise of Home This 2018 album from the Scottish folk band RURA is excellent.

The theme for the whole album is home and what it means to people, but it also invokes the Scottish landscape - the wider sense of home for all Scots. The title track and a later track includes some nice sampled reflections on home - the only lyrics on the album. The words are explored here in a nice reflection on their meaning.

It's an addictive listen.

Posted by Alan Parkinson at 04:01 No comments: