Learning outside the Classroom

Exploring the landscape means getting outside the classroom...

We are delighted to announce that the Geography Collective has been shortlisted for a Learning outside the Classroom award.

We would be even more delighted if you would consider voting for us, especially if you have been enthused by our Mission:Explore books, app or website, or perhaps been visited by us, seen us at Glastonbury, Latitude or the Hay Festival, ridden on buses in Suffolk, cycled along Sustrans routes in many cities, explored the Great Glen with Discover Explore or in some other geographical context...

We're going to be on the road in the next few months, and also will be running our Geography Camp in December, of which more later...

Please click the link and give us your vote. Thanks :)
Posted by Alan Parkinson at 03:14 No comments:

Labels: Awards, Learning outside the Classroom, The Geography Collective, Vote for us 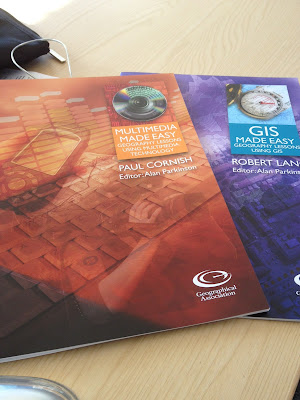 Preparing some resources for the course on Geomedia in Salzburg that I am leading next week.

You still have chance to get funding to join me for a repeat of the course in February 2013, and the course is likely to run several times during 2013 - I'd love to see lots of you there... you can get your fees, accommodation and travel paid for.

I'm going to be using several activities from two books which I edited, and were published in April this year.
I will also be using Paul Berry's adaptation of my Landscape in a Box idea.

We'll be doing some fieldwork and there's a photo competition too...

You really need to have a copy of these books in your departmental library.
They have been selling well, and getting good feedback from users.
You can order them from the GA shop - click to follow the link, and remember that GA members get a discount on purchases, and free P&P

Multimedia made Easy by Paul Cornish

GIS made Easy by Bob Lang
Posted by Alan Parkinson at 12:40 No comments:

The Giant Naked Lady of Cramlington (let's see if this blog post makes it past the filters...) is opening in October as part of an attraction called Northumberlandia... 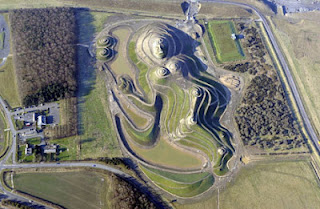 It has been created by the Land Trust. Admission is FREE.

There is a viewpoint where the feature will reveal itself to the visitor, and plenty of walks - it's difficult to see the whole feature and it will change as people walk through it...

Might make a useful new tourism case study if you're in the area...
I'll definitely pop in the next time I'm passing....
Posted by Alan Parkinson at 09:37 No comments:

A year ago, I was just coming to terms with the (premature) end of my job at the Geographical Association after three wonderful years, and decided to try things out as a freelance geographer: author, consultant, trainer and whatever else people would pay me to do. 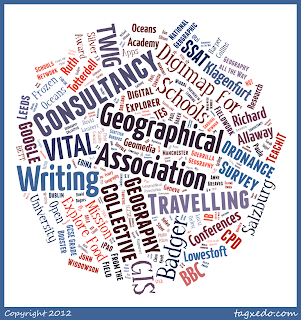 Here's a visual summary of what I've been up to, made with Tagxedo

As it happens, my extensive networking over the previous decade meant that I had a few projects to start in on, the Geography Collective was going from strength to strength, and I was fortunate to get a temporary contract managing the OU's VITAL CPD portal. Paula Owens involved me in a writing job for the BBC, and together we produced a major resource for the Digimap for Schools for EDINA. Thanks also to Richard Allaway, who asked me to write content for his Geography all the Way website and collaborate on an innovative series of eBooks, the first of which is now available to download from the iBookstore.

The writing work I did for the RGS-IBG's From the Field, working to translate the research of PhD colleagues, was later awarded a GA Silver Award, as was the Geography Collective's MissionExplore.net. Our books had won a National Trust / Hay Festival Outdoor Book of the Year Award, and we were also runners-up at the Educational Writers' Awards, with the ceremony held at the House of Commons. I produced a set of resources on the Frozen Oceans for Jamie Buchanan Dunlop which are now used in hundreds of schools, and we've worked on a few more things as well...

I wrote a book for Badger publishing: a GCSE Grade Booster, which was published in April. I also have a children's book on Otzi the Ice Man due for publication in November 2012.

Karl Donert involved me in a range of EU projects, and steered another one to successfully gaining funding. This took me to Europe several times, and my passport will continue to get regular use for the next few years. The digitalearth project took me to Manchester for the GA's conference where I met the tireless Joseph Kerski. Paul Baker involved me in Independent School events.

I've found myself in many different hotels once again, and there have been plenty of highlights, and also lots of lonely days staring at a screen willing ideas. Some moments that stick out from the last year involve:


Oh, and I have a book manuscript co-written with John Widdowson, which has to be on the desk of Ruth Totterdell at the GA first thing Monday morning !
Here's to my 2nd year of freelancing. Unless I get an offer to entice me back into the classroom somewhere in Norfolk, I'll carry on doing what I'm doing for a while yet.

And I have a reasonable number of diary slots through into 2013 if you fancy getting me involved with something you have planned...
Posted by Alan Parkinson at 07:17 No comments: