After  a busy year of blogging, I'm taking a break for the Christmas and New Year period.
There may be some circumstances under which I will return, as something majorly geographical could happen before the 1st of January, but if not, have a peaceful break everyone and look forward to blogging through 2013 with you.... Image shared under CC license by Flickr user calsidyRose
Posted by Alan Parkinson at 06:05 No comments:

How about this for a great way to teach about landscape: by creating your own ?

Does this image mean anything to you ?

If not, then you've probably never heard of MINECRAFT: a game that has millions of players worldwide and is finding its way into lots of schools too.

My son LOVES Minecraft and has produced some amazing creations on the Pocket Edition that we have on the two tablets in the house. He and his sister play together in a creative world they have generated.

When I upgrade my computer in the New Year, we will put the full version on, and really start to explore the Minecraft Universe.

Recently, after a Twitter exchange with Claire Rafferty in Australia, I created a Google Doc and started to put together a summary document which could form the basis for Geography teachers to start to think about how they could use Minecraft in the Geography classroom... and also explore where it was being used in other parts of the curriculum, and also as an extra-curricular activity.

I discovered Stephen Reid, who I'd quoted in the document was interested in the project, and he was happy to get involved too. He runs a free Minecraft project for schools to get involved with the game. Check it out.

Finally, there seems to be a movie of the creation of Minecraft that has been produced, and the trailer can be seen here - my son will be interested in this:

I'll open the document up to scrutiny and publish it in various places in the New Year so that I can work on it over the Christmas period
Get in touch if you have something you want to contribute...

Posted by Alan Parkinson at 07:26 No comments: It described the use of the word palimpsest to describe a landscape. It's a phrase that I use when talking about landscapes, although it's usually qualified, in the same way as Richard Mabey does, by saying that the landscape rarely starts again - elements of the past remain stubbornly and reappear....
The rains of the last few months have shown up in many areas the routes of previous watercourses and drainage which farmers tried to suppress....

One to read over Christmas perhaps...
Posted by Alan Parkinson at 02:20 No comments: 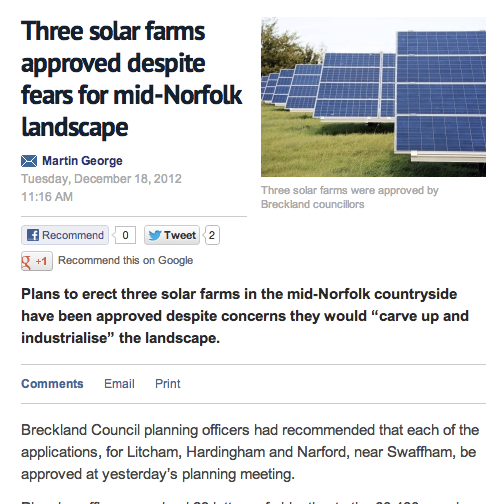 The first of two mentions for my village in the local paper today.

The first relates to the planning application for a SOLAR FARM.
This is an alternative renewable energy proposal to WIND ENERGY, and one that students could perhaps get involved in assessing for its potential benefits and problems for the local landscape.

There were some objections to the plan which received approval today, but also some good points made in its favour of course.
You can read the application, which includes a full appraisal of the site in the document which is linked to later in this blogpost.

One of the factors that had to be considered is the impact on local drainage. I pass the proposed site occasionally - it is not on what could be called a main route - and it is sloping, but doesn't appear to have the same drainage issues as other fields which have received a lot of rainfall in recent months.

If you have suitable digital mapping software, you can visit the proposed site at TF 87517 20010.

According to this BBC NEWS article the scheme had been opposed by Litcham Parish Council which said it opposed the "industrialisation of a tranquil area".

Also in the EDP was a quote from a Litcham resident:

“In my view it would be criminal damage to desecrate [the countryside] in the manner proposed. The countryside is being eroded at an ever-increasing pace. There must be a better place than this.”

I'm going to explore this a little more with a view to turning it into a possible activity for a unit - an alternative to the usual wind farms perhaps.

Chapter 4 of 'Look at it this Way': Gone with the Wind, explores the changes that come about as a result of wind farms and similar developments. This could be a useful update / additional activity when using that chapter. Are these likely to become more common over the next few years ?
They will work when it isn't sunny - wind turbines won't work if it is't windy...

Are there any proposed solar farm developments near you ?
Posted by Alan Parkinson at 01:29 No comments: From the excellent LANDSCAPISM blog from 2011 comes a useful list of landscape-based music.
There are some useful pieces of music and other soundscapes.

The work of Chris Watson features heavily, which is not surprising.
Chris Watson's music is available on Spotify, and there are a few albums of his on there - well worth listening to. I was interested to see a collaboration with Robert MacFarlane that he did recently.

You can listen to this via the embedded player here:


I have a few ideas of my own which I've come across during 2012. I'll add them to a future blogpost.

Try the Landscape of Music too - interesting map concept...

This idea came to me just now. 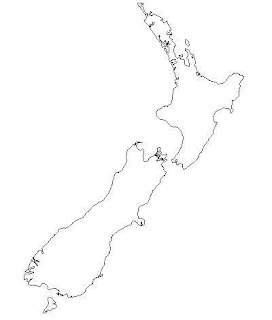 I was searching for an image of me for a background to a slide, and this image popped up.
I wondered why for a second then realised that my name: ALAN is contained within the name 'ZeALANd' in New Zealand.

I started wondering whether there were other names hidden in the names of countries or cities.

Can you find and suggest any other 'placenames' ?

Perhaps this could be set as an alternative homework activity. If nothing else, it will get students looking at an atlas...
Posted by Alan Parkinson at 03:29 No comments:

Geology Map from BGS - grab your own...

Posted by Alan Parkinson at 07:42 No comments: