All schools that lie within the newly designated South Downs National Park will soon receive an education pack which was put together by the Geographical Association.
It features a range of activities to explore the geography of the National Park, and the idea of landscape as a palimpsest...
It matches nicely with some of the ideas in my KS3 Toolkit: "Look at it this Way", which is available from the GA's online shop.

The pack will also be available to download from the South Downs website from Monday 16th of May....
Posted by Alan Parkinson at 01:45 No comments:

My KS3 toolkit book "Look at it this Way" has a lesson looking at the "yellowing" of the countryside through increased planting of oilseed rape. This year, the countryside is turning yellower than ever. There has been rising demand for oilseed compared with cereals, and a growing market for the oil. This means that a larger area has been planted, and the warm, dry weather in April has not damaged the crop as much as it has other crops...

I was listening to Farming Today on the way up to Sheffield today and happened to be passing a large expanse of yellow at the time. 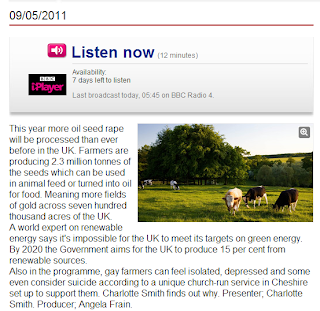 You can LISTEN AGAIN to the programme...

Another bonus of the warm weather in April is that English Strawberries will be ready earlier than usual, and be particularly sweet this year...
Posted by Alan Parkinson at 04:09 No comments:

This could be a wonderful context for teaching lessons 3 and 4 of the toolkit book in particular...


My Farm is an ambitious project that has been announced by the National Trust within the last week (this blog post was ready on the day but has been sitting in draft for a while), and has been getting quite a lot of press and media coverage.
It extends the idea of virtual farming with very popular online games like Farmville (which has tens of millions of players) to an actual farm, part of the Wimpole Hall estate near Cambridge. I have been to the farm myself some years ago when my kids were much smaller... 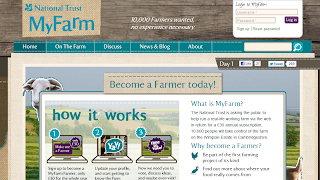 The website provides some background detail as to how the scheme is going to work. The National Trust are looking for 10 000 people to invest £30 in the scheme, which will allow them to take some decisions relating to the farm. They will vote on a range of issues relating to the management of the farm, although given its organic status and location, there are obviously going to be limits as to what those decisions might be...
I am tempted to go for it, and may well do so in the next few days if I can get £30 together from somewhere.... 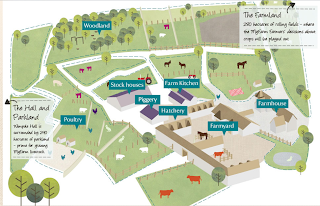 Here's a map of part of the estate where the farm is located.


All a long way from the old Herefordshire farm game of the late great Vincent Tidswell....

The virtual farmers come from a range of backgrounds judging by the messages that are already appearing on the forum site that goes with it...


The £30 to take part could perhaps be raised by a teaching group / year group, or even taken from a departmental budget as an investment in curriculum engagement.

There are already some farmers who are geography teachers such as this person here:

There is a YouTube video here, one of several from the MY FARM CHANNEL which sets the scene for the first few decisions which will be made once the virtual farmers have been recruited...


A similar sounding project (by name) is FROM MY FARM which provides information about seasonal produce for consumers...
This links through in turn to the BRING BACK SUNDAYS website and campaign which is aimed at getting us eating a Sunday roast again.
Posted by Alan Parkinson at 12:12 2 comments: